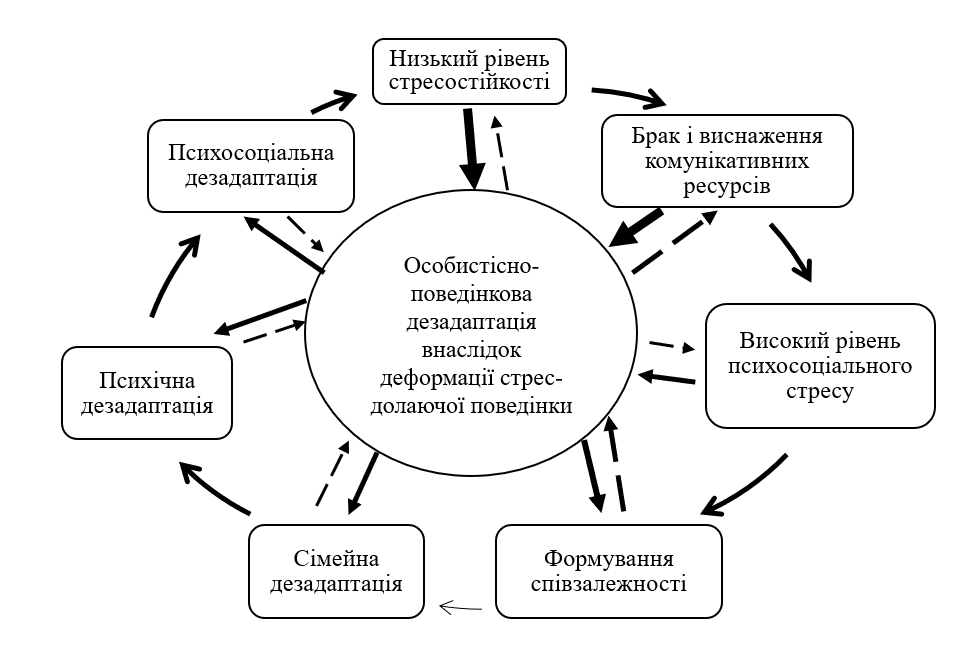 Program of medical-psychological correction of maladaptation of wives whose husbands suffer from schizophrenia, and its effectiveness

The purpose of the study is to substantiate, develop and evaluate the effectiveness of the program of medical and psychological correction of maladaptation of wives whose husbands suffer from paranoid schizophrenia (PS).

To achieve this goal, in compliance with the principles of bioethics and deontology, on the basis of KU "Vinnytsia Regional Psychoneurological Hospital. A.I. Yushchenko" surveyed 120 women whose husbands had PS and 50 women whose husbands did not have mental or behavioral disorders. The comprehensive examination included the use of clinical-psychological, psychodiagnostic and statistical research methods.

The analysis of the obtained results allowed to build a model of the psychogenesis of psychological maladaptation in wives of men with PS, according to which the primary biologically determined stress resistance provoked unjustifiably rapid depletion of communicative coping resources, which led to increased vulnerability to stress provoked by the husbands' disease, resulting in the formation of incongruent interdependent relationships, which led to the development of family maladaptation, which, in turn, caused problems of psychosocial functioning, which ultimately led to the formation of maladaptive mental states and further reduced the ability to resist stress, thus closing the vicious circle of pathological interaction.

Based on the created model, the effectiveness of the program of medical and psychological correction measures was developed and proved, the essence of which is to increase stress-protective resources and optimize stress-coping behavior as a core pathogenetic link in the development of maladaptation, which is achieved using psychoeducational, cognitive-behavioral, systemic and group personality-oriented actions, which are implemented in eight successive stages.