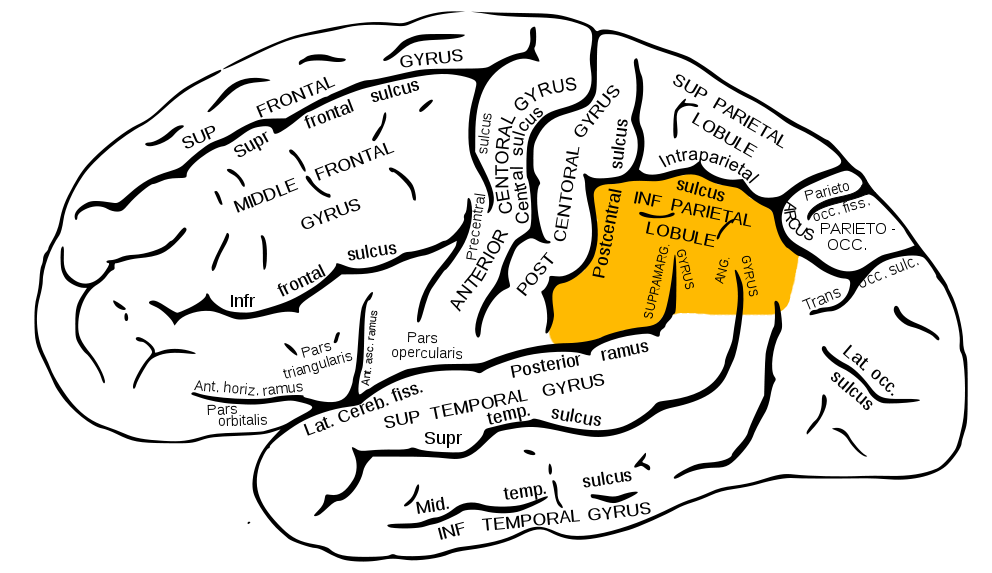 Background. During the screening phase of the study, we observed a middle-aged woman with a rare disorder known as Gerstmann's syndrome. The woman showed four important neuropsychopathological symptoms that describe this disturbance.

Results. A 33-year-old East European woman from Ukraine has been suffering from acalculia since age six, digital agnosia, confusion of left-right orientation, and writing disturbances. She is lifelong right-hand dominant person and somebody in her family suffered from mental illness. She used to be successfully treated for anxiety and obsessions. She does not use any illicit drugs and denies alcohol use or abuse. The woman had never smoked cigarettes. Physical examination, CBC, complex metabolic panel, endocrine tests were within the age range. CT and MRI scans were common. Rheoencephalography revealed signs of moderate changes in venous outflow in the carotid basin on the left. We detected the most important psychopathological and neurological findings in mental health examinations. During assessment the woman was unable to perform simple arithmetic calculations. That is a crucial symptom, well known as a term an acalculia. Digital agnosia as the inability to identify or point to her own or someone else's fingers was present as well. Also, she had left-right disorientation - an inability to distinguish between right and left, and mild writing disturbance - decreasing of the capability to express thoughts in writing.  In addition, she had demonstrated constructional apraxia by performing the clock drawing test.

Conclusions. We brought to light a rare syndrome in Ukrainian woman. The incidence of that syndrome in the general population has not yet been known. We found all four symptoms from a tetrad   as a result of general brain damage with learning disabilities but some of the symptoms were mild. It is believed that some of them diminishing in adults over time.

Gerstmann syndrome (GS) is an infrequent disorder described as a loss of four certain neurological functions: failure to write (dysgraphia or agraphia), the loss of the capability to do mathematics (acalculia), the failure to recognize one’s own or another’s fingers (finger agnosia), confusion of laterality of body [1]. Other names of the syndrome are developmental Gerstmann's syndrome (when it occurs in children) [2], Gerstmann tetrad [3].

In 1924 the neurologist from Vienna, Dr. Josef Gerstmann, was the first who reported that disorder [4]. Gerstmann syndrome has influence both men and women equally. The worldwide spread of GS in the general population has not yet been known. The syndrome can affect children and adults as well.

That disorder is usually associated with brain damage in the dominant (commonly left) hemisphere involving the angular and supramarginal gyri near the temporal and parietal lobe junction [5]. The angular gyrus is mostly involved in translating visual patterns of letters and words into significant information, such as during reading [1, 5].

GS occurs as a result of a lesion in the dominant parietal cortex, and described by four primary symptoms [6]:

In ICD-10 [7] Gerstmann syndrome on a par with acalculia and arithmetical disorder is included in the Disorders of psychological development category (F80-89) like a Specific disorder of arithmetical skills (F81.2).

The 33-year-old woman from Ukraine has been showing acalculia since age six, finger agnosia, confusion in right-left orientation, writing disturbances. She is right-handed and has a mental illness history in her family. She was successfully treated for her anxiety and obsessions. She is not a drug user and denied alcohol use and abuse. Physical examination, clinical blood count, comprehensive metabolic panel, endocrine labs were in an age range.

Participant provided written informed consent of involvement. The study was authorized by the ethics committees of the TMA "Psychiatry" in Kiev and conducted in conformity with the Declaration of Helsinki.

The most important psychopathological and neurological findings according to mental status examination are shown below [8].

Neurological findings included the presence of all four components:

Moreover, the psychologist asked the person to write down a number that he named (pointed in parenthesis – 1048 (one thousand forty-eight)). The result is shown below (Fig. 2).

The failure to identify or specify her own or another's fingers (finger agnosia) was also present. Finger agnosia is characterized as trouble in recognizing fingers on the hand. It had been tested by requests like, "Touch my index finger with your index finger" or "Touch your nose with your little finger». She also could not name and show fingers correctly.

The inability to distinguish between right and left. The laterality discrimination test was used to examine Left-right disorientation. It had been tested by requests like, "Show me your left hand", "Touch your right foot" or "Touch your left ear with your right hand". A positive test is characterized as the incompetence to keep these commands within the presence of otherwise ordinary sensory and motor function.

In addition, we proposed her a clock drawing test. Fig. 4 shows the original clock vs. patient’s clock picture and illustrates a woman’s executive function impairment: constructional apraxia, and the inability to copy simple drawings.

Rheoencephalography (REG) had shown the signs of moderate hypovolemia of the brain with an increase in the tone in vessels of peripheral resistance. Venous outflow is moderately hampered in the carotid basin on the left; phenomena of venous distention and dystonia are observed.

Mental status examination. Talkative, happy to talk about herself. She has no complaints. Calm. The mood is even. No productive symptoms are observed. Thinking is tough, with excessive details. Judicious. She agrees to be examined and to do some tests.

Brain CT and MRI - were unremarkable.

In the series of the "internal” rhythm examination with the help of the metronome over the month, we observed the fluctuations in the woman's mood from hypomanic to depressive, with strict reflection in the frequency of the metronome beats [9].

Gerstmann syndrome is a neuropsychological disorder that is described by a variety of symptoms suggesting damage in a specific area of the brain. [10]. The most common outcome of the injury to the inferior parietal lobule of the dominant hemisphere is GS [5].

On the other hand, GS and other combinations with the posterior parietal symptom (such as acalculia) are as a rule the consequence of focal cerebrovascular illness comprising a posterior branch of the left middle cerebral artery or more broad area of infarct, mostly involving an angular gyrus or underlying white matter (Brodmann area 39). Uncommonly, traumatic brain damage by extensive new growth in this same area can cause all or some elements (e.g., acalculia) of syndrome' symptoms [11].

Albeit, it has been proposed that decreasing symptoms happens in kids. It appears more likely that most of them do not get over their deficits but instead just learn to adapt with intensive special education when the diagnosis was made early in particular [12].

It is said, that the ordinary Gerstmann's syndrome has no aphasia [13]. It usually presents as either an inherent learning disorder or as a trait of the middle cerebral artery watershed stroke as well [14]. Both forms are infrequent, and the childhood type in particular. It can also be a characteristic of neurodegenerative illnesses such as Alzheimer's disease [15] or as a consequence of head trauma [16].

We presented a case of a woman with rare Gerstmann syndrome, turn to the clinical presentation, psychiatric-psychopathological and neurological findings, retrospective review of the clinical file, and literature search.

We found all symptoms from a tetrad but some of them were mild. In addition to all four components, she had constructional apraxia.

Following the analysis of the symptoms' onset, the presence of a psychiatric history in family members and the woman herself, and the results of her clinical examination, it can be supposed that woman has a Gerstmann's syndrome as a result of general brain damage with moderate learning disabilities.

The authors declare that no competing interests exist.