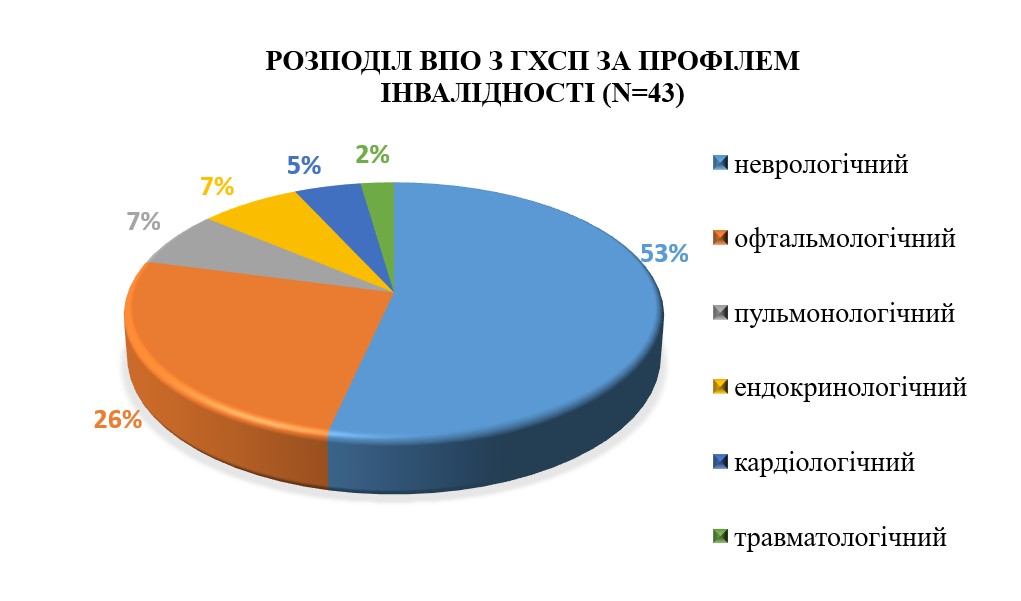 Background. The war conflict in eastern Ukraine, which has been going on since 2014, has led to the emergence for the first time in the recent history of our country of a very important problem related to the vital stress on the population in the conflict zone and health of Ukrainians. The multilevel psychophysiological reaction of the individual in such conditions against the background of the failure of compensatory mechanisms, of course, leads to the formation of maladaptation patterns, and ultimately to mental and behavioral disorders in internally displaced persons (IDPs). Therefore, the development of an optimal algorithm for early diagnosis and study of the psycho-physiological condition of respondents who were forcibly displaced is extremely important for the timely provision of qualified rehabilitation and psychological and psychiatric care.

Objective. To study the socio-demographic characteristics of respondents and predictor features of the formation of mental and behavioral disorders in IDPs.

Materials and methods. During the period 2015-2016, a comprehensive survey of 130 IDPs aged 18 to 80 who were forced to leave their places of residence in connection with the war conflict in the east of the country and temporarily lived in sanatoriums in the Odessa region was conducted. From the general population of respondents by clustering based on leading pathology or its absence, three representative groups were created: patients with somatic pathology (GSP) who had a disability due to somatic disease (33% of IDPs); patients with mental illness (GMP) and disability due to mental illness (33% of IDPs); conditionally healthy (GCH) (34% of IDPs) who did not have severe chronic illness or disability. Research methods: socio-demographic, clinical-anamnestic, clinical-psychopathological, psychodiagnostic, and statistical.

Results. Socio-demographic characteristics of the respondents: women predominated among the surveyed (69.2%); by age groups IDPs were evenly distributed in the range of 21 to 80 years; the education of almost half of the IDPs of all groups corresponded to the special secondary level; by marital status, the vast majority of HCVD IDPs were single (60.5%), which is a consequence of the communicative characteristics of persons suffering from mental disorders. The vast majority of IDPs assessed their financial situation as poor (43% of IDPs) and average (36.2% of IDPs) without a significant difference between GSP and GMP. Also, 80% of respondents complained of feeling unwell, and 93.8% of respondents witnessed or participated in traumatic events. Half of the respondents were in forced displacement for more than 1 year; more than a third (36.1%) - from 6 months to 1 year.

Conclusions. Thus, the study groups of IDPs were representative in principle, but had some differences due to baseline health indicators, as required by the study conditions. When considering the predictors of mental and behavioral disorders in IDPs (n = 130), of which 93% of respondents were victims of war or terrorism, it was found that the largest share in all groups were neuroses, behavioral disorders, mental disorders, nervous system diseases, alcohol or other psychoactive substance abuse, sensory diseases, eating disorders. Among the factors influencing the state of health, the vast majority of IDPs noted lack of housing, unsatisfactory living conditions, low income and social insurance, insufficient or unavailability of health care, social insurance, problems related to adaptation to lifestyle changes. GMP was most sensitive to the factors of lack of work, unsatisfactory housing conditions, low income, tobacco, and alcohol use, and respondents to GMP were the most aggressive and conflicted. That is, against the background of permanent mental and physical stress factors, features of marital status, comorbidities, the stress of adaptive-compensatory processes, it is possible to exacerbate both existing and the formation of new mental and behavioral disorders in IDPs. Therefore, timely diagnosis of the mental state of IDPs, detection of mental and behavioral disorders, as well as treatment and rehabilitation interventions will help reduce the incidence and improve the overall health of IDPs.